I think everyone knows by now that I’ve been following Masterchef religiously, and I was really fascinated with Maggie Beer’s walnut flat bread, which was part of the nightmare terrine episode. If anything looked particularly delicious on that serving board, it was that crisp brown flat bread that we all thought we could smell through the telly. Didn’t it look fantastic? So as I was shopping for ingredients to make tonight’s dinner, I thought I’d pick up what I need to make this flat bread at the supermarket.

At the health foods aisle, I stared at the price tag, completely dumbfounded at the fact that 500g of buckwheat flour costs almost 6 dollars! After trying to contain my annoyance, I decided to simply replace it. Buckwheat flour is meant to add a nutty flavour to it, but I suppose with the addition of walnuts, it won’t be missed much, especially not at 6 dollars. Hey, I’m an unemployed graduate! *grumble* Also, I skipped the roasted fennel because I think it’s fairly unpleasant to chomp on one of these. A tip from me: buy crumbed walnuts because they’re cheaper and if you buy them whole, you’ll just have to chop them up anyway. Making flat bread was new to me, so I didn’t make any other adjustments, and most of the original instructions have been included below.

After the mixing, kneading, rolling and baking, what resulted was four large pieces of delightfully crispy flat bread that made it really hard for us to stop eating! Whilst perfect on its own, it’d be great with all types of cheeses and dips (for some reason, I’m imagining pairing this with fresh ricotta, YUM!). Plus, by snapping off pieces, they’ll look really interesting on party platters, besides the wonderful flavours that easily trump water crackers. You can also add in chopped olives, mixed fruit or raisins for added flavour in every bite, if you like – but if this is all you have, then it’s really all you need. 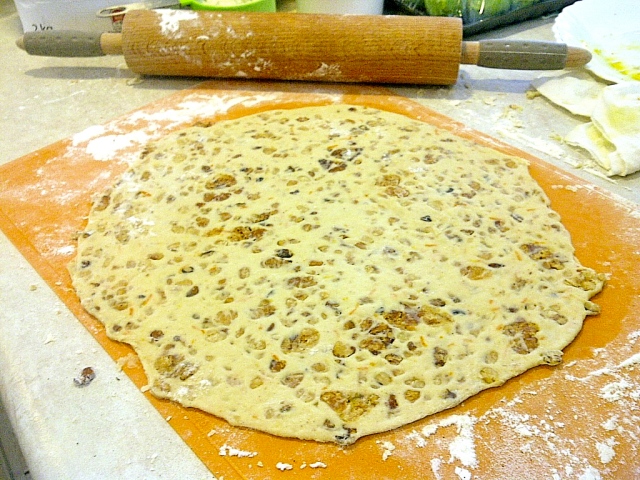 Heat the milk in the microwave at 50% power for 1 minute in a large bowl or until just warm. Whisk in the yeast, honey and 100g of the flour. Let stand for 15 minutes.
Pre-heat a fan forced oven to 180°C.
Add the ginger, walnuts, salt, olive oil, and orange zest to the yeast mixture and mix together well.
Pour the remaining flour onto the bench and make a well in the centre.
Add the yeast mixture into the centre of the well and using a fork, slowly incorporate the flour into the yeast mixture. Once all the flour has been incorporated, use your hands to knead into a dough (use extra flour to dust the work bench and your hands if the dough is slightly tacky). At this stage, the dough should bounce back and be reasonably firm.
Divide the dough into 4 even pieces. Dust flour on the bench and rolling pin, and roll each piece of dough out to 2mm thick.
Place the flat bread onto a lightly floured baking tray (or line with baking paper and grease lightly), brush with olive oil, then bake in the oven for 15 minutes. Remove from oven and place onto a wire rack.
If you prefer the flat bread to be a crispier texture, allow to cook for a few more minutes. but make sure that the edges don’t burn. Note that the flat breads will feel slightly soft straight out of the oven but will firm/crisp up once cooled down. To serve, snap the bread into pieces.
Stash some away for yourself when no one’s looking because everyone’s going to want more!

Twenty-two year old who loves coffee and chocolate too much for my own good. I bake in my free time and read food blogs until late in the night (avoid this; it causes hunger pangs!). If I had a bucket list, it'd consist of places that I'd like to dine at. I would love to learn about authentic French cuisine and I wish I could master making macarons - they're too darn intimidating. I whine about how unhealthy some foods can be, but I pack away dessert like I've been starving myself. This isn't much of a secret, but I adore McDonald's breakfast and French fries. I know I shouldn't! Oh, and I believe no one should eat mediocre food that they don't enjoy because it's not worth the calories.
View all posts by saphster →
This entry was posted in Bread, Recipes, Side Dishes and tagged Australia, bread, flat bread, food, Maggie Beer, Masterchef, recipes, side dishes, television, walnuts. Bookmark the permalink.